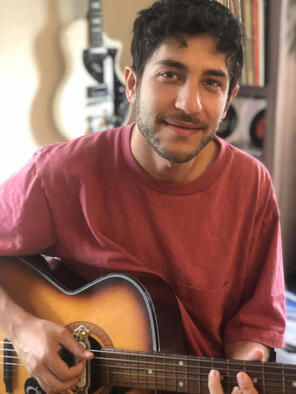 Jacob Sunshine is a guitarist, producer, composer, and educator based in the Boston area. Growing up in New York City, Jacob was exposed to a wide variety of musical styles and philosophies, and was fortunate enough to study with luminaries like Kelvyn Bell, Dave Moreno, Paul Bollenback, Michael Lorimer, and Sam Dickey. As an instructor, it is Jacob's aim to help students develop their own singular musical voices, explore pathways for fluidity and fluency in their chosen musical idioms, expose students to new genres and styles, and above all take joy in collaborative music making! He has a deep conviction in the transformative value of musical creation, and believes that learning an instrument can

Prior to his move to Boston, Jacob received a B.A. in Anthropology with a minor in jazz performance from Columbia University. Following graduation, Jacob collaborated with a diverse array of groups in the New York area including Pear Moth, Jazze Belle, Ghostpal, EMEFE, Genes and Machines, KTHRTK, Lanier, and Phonoscenes. He's also worked with several solo artists and singer-songwriters including Elysse, Kate Ferber, Taylor Simone, Conrad Tao, and Oliver Ignatius. Groups performed at venues across New York like The Blue Note, Joe's Pub, National Sawdust, and Rough Trade Records, and at festivals like Winter Jazzfest, Montreal Jazz Festival, and Rochester Jazz Festival.

Jacob is currently pursuing a PhD in ethnomusicology at Harvard University. In the last year, Jacob carried out fieldwork in Barranquilla, Colombia, where he studied the city's unique and historical sound system culture. There, Jacob did interviews with audio engineers, musicians, DJs, radio personalities, community leaders, record producers, journalists, and painters to produce an oral history about the development of sonic technologies, West and Central African music in Colombia, and the growth of neighborhoods in the city. Currently, Jacob works with the indie folk group Cordelia, and is producing his first solo record.​