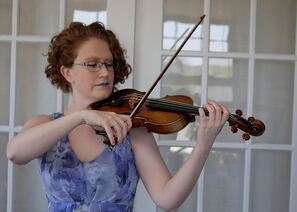 Violinist Nicole Parks uses her career as a performer and educator to bring new music and inclusive programming to a wide range of audiences. She is a co-founder of the Semiosis Quartet, a string quartet that focuses on the music of the 20th and 21st centuries. Previously, she created and conducted The Lirica Chamber Ensemble to play rarely heard and new works for chamber orchestra.

In August 2019, Semiosis Quartet appeared at Tanglewood with Bill Barclay and Concert Theatre Works in a production of The Chevalier, featuring the music of Joseph Bologne, the Chevalier de Saint-Georges. During the 2018-19 season, they also collaborated in performances with Ogni Suono, and The Boston New Music Initiatives; made their Southwest debut at the Oh My Ears! Festival in Phoenix; and appeared at the International Alliance for Women in Music Conference. As the recipient of a grant from the American Music Project, the quartet presented a program of American women composers including Florence Price, Ruth Crawford Seeger, Ellen Taaffe Zwilich, Shelley Washington, and Caroline Shaw. The quartet has performed at festivals including New Music Gathering, the Re:Sound New Music Festival in Cleveland, the Cortona Sessions for New Music, and the Deer Valley Music Festival. Deeply committed to music education, Semiosis is on the faculty at The Boston Conservatory at Berklee’s High School Composition Intensive, and has worked closely with student composers, musicians, and faculty at Tufts University, MIT, and Bowling Green State University.

Nicole is also in demand as an orchestral musician. She currently holds the concertmaster position with the Philharmonic Society of Arlington and appears regularly with ensembles such as the Boston Modern Orchestra Project, Odyssey Opera, Cape Symphony, New Bedford Symphony Orchestra, Portland Symphony Orchestra, Monadnock Music, and the Rhode Island Philharmonic.

Nicole serves as the President of the Massachusetts chapter of the American String Teacher's Association. She maintains a private violin/viola studio in greater Boston and teaches at the Concord Conservatory and the Dedham School of Music. Additionally, she has taught at performance and education workshops, including BIMA at Brandeis University and the Minnesota All-State Festival, and coached chamber music at Stringwood. Nicole is currently on the violin faculty at the Governor’s School of North Carolina, where she leads daily discussion based classes that focus on history, theory, trends in contemporary music and culture, diversity/inclusivity in the classical music world, improvisation, and other related topics. The school’s faculty frequently provide interdisciplinary seminars combining STEM subjects with the arts.

Nicole holds a Bachelor of Music in violin performance from St. Olaf College and a Master of Music and Professional Studies Certificate from The Boston Conservatory, where she studied violin performance and pedagogy with Sharan Leventhal. A native of Minnesota, Nicole is currently based in Boston.